Yesterday and today are gently juxtaposed in downtown Modesto’s unique blend of old and new: Two blocks northeast of The State are the stately McHenry Mansion and McHenry Museum & Historical Society — which originally served as the city’s first library — both of which were named for one of Modesto’s founding families. Three blocks to the southeast is the Gallo Center for the Performing Arts, a multi-million dollar performing arts center that debuted in the fall of 2007. Three blocks to the northwest is Graceada Park, Modesto’s oldest city park, designed by John McClaren, the designer of San Francisco’s Golden Gate Park, and developed in 1907. Two blocks to the southwest is the decade-old McClatchy Park, a small oasis of lawn and roses, dedicated by the McClatchy newspaper family (and owners of The Modesto Bee).

The State Theatre was a relative latecomer when it was dedicated to the citizens of Modesto in 1934. By the time the theater opened on Christmas Day, Modesto had already been striving for its designation as one of the nation’s top agricultural regions for 64 years. To this day, the area is recognized as being a major contributor to the nation’s breadbasket with products including milk, almonds, chickens, eggs, walnuts, peaches, alfalfa, grapes, tomatoes, dry beans, and apricots. 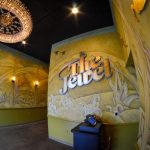 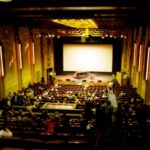 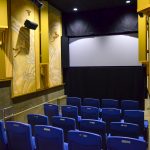 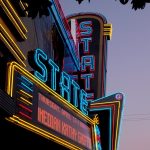