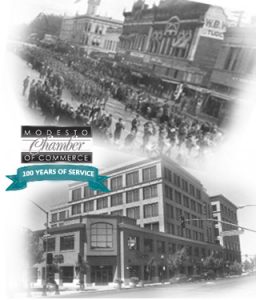 The Chamber helped transform 9th Street into a main highway through town, sponsored an air show to perform at the newly enlarged municipal field dedication, and lobbied for a dorm at Modesto Junior College. The Chamber’s five-year plan included a new civic auditorium, an annual county fair and the creation of Lake Modesto.

Along with other San Joaquin Valley cities, the Chamber lobbied to expand the Stockton to Bakersfield section of Highway 99 to four lanes. The Chamber also worked to designate Modesto as a defense area for housing so that local defense workers could have priority on purchasing building materials. After the war, the Wintergreen building became a dormitory for wives and relatives of servicemen in the local hospital, thanks to a $2,000 Chamber donation. 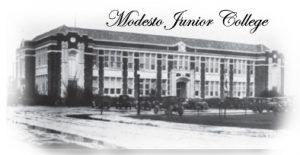 During this time, Modesto received its first All-American City designation and enjoyed booming post-war prosperity. The Chamber assisted with an All-American City Day celebration by hosting business leaders, industrialists and government officials from the Bay Area. Guests enjoyed a banquet, a community and industrial tour, and honored Modesto Junior College History guest status in the All-American City Day parade, which was attended by some 25,000 residents. The Chamber partnered with the city of Modesto to establish an Industrial Department to serve existing industry and attract new companies to Modesto, initiated the widening of McHenry Avenue and Yosemite Boulevard, and worked to establish a four-year college in the area.

The Chamber continued its focus on industrial development, which brought new businesses to the area and spawned tens of millions of dollars in investments. The Chamber organized the Citizens Committee for Sewer Improvement and coordinated efforts for passage of a $7.2 million bond issue.

Economic development was the Chamber’s top priority. The Chamber also took on several other causes, including attempting to secure additional air service, a civic interest in the downtown plan, initiating a sign ordinance and safe building codes. Other activities included growth policy and land use planning and environmental issues related to water quality control and local future energy needs. 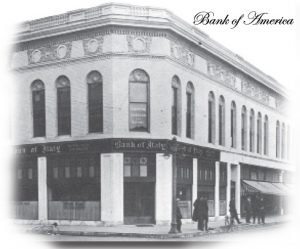 The Chamber emphasized economic development and became involved in legislative advocacy. Both a legislative and a Paul Revere committee were formed to take positions on ballot measures and legislation affecting business. The Chamber sponsored candidate forums prior to elections and met with elected officials and city and county staff. Modesto Bank of America History When several companies expressed interest in relocating to the Modesto area, the Chamber hired a full-time economic development director. Economic development events included large-scale community and industrial tours, sponsoring Modesto Industry Week, creation of a Community Assessment Report, and forming the Modesto Convention and Visitors Bureau. In the late 1980s, the Chamber was accredited by the U.S. Chamber of Commerce, which placed the Modesto Chamber of Commerce among the top 10 percent of chambers nationwide for cities of its size.

Many changes occurred in the way America conducted business. Technology transformed the U.S. economy to a global economy. The Modesto Chamber of Commerce focused on growing the local economy with “Shop Local” as its mantra, and it had an active Political Action Committee. The Chamber established the Ag Aware program to raise public awareness of the role of agriculture in our economy, and to fund struggling FFA programs. The Convention and Visitors Bureau was very successful in bringing new business to town. The Chamber needed to remain relevant, or it could not have stayed afloat. Members and businesses were no longer just paying their dues – the Chamber had to earn them! Leadership Modesto was better than ever. Also during the 1990s, the Chamber supported a sales tax for roads and built partnerships with other chambers and government.

Chamber involvement included commercial transportation corridors, a proposed transportation sales tax, construction labor matters related to the University of California, Merced, and achieving a balance between economic expansion and farmland preservation. Creating a business-friendly environment among widely divergent public and private interests was a major goal of the Board in 2002. Some of the efforts to achieve this goal included maintaining the Chamber University partnership, supporting Connecting Stanislaus (a partnership between the Chamber, Stanislaus County and the Modesto Bee), forming The Central California Chamber Alliance (a coalition of local chambers), and monitoring the state of affairs of local education.

The Chamber underwent an internal reorganization in order to focus more on value for the membership, and to help solidify the Chamber as a leader in the community and an advocate for and promoter of business. The “Buy Local” campaign was reestablished. Chamber University class offerings were expanded to provide key business training for members. The Chamber created a partnership with Stanislaus Alliance to bring business and educators together to improve the quality of the workforce through education.